Zermatt is situated in the canton of Valais & is deservedly on the list of the most popular skiing regions in the world. Population of Zermatt is candidly tiny - just 5,800 inhabitants, all of whom have an unrivalled pleasure of enjoying the disturbingly beautiful views of Switzerland's emblematic Matterhorn every day ;) 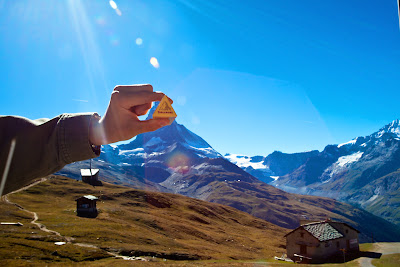 They also have a unique opportunity of reveling in such unique alpine fauna like Zermatt goats. This 'wonders of nature' are exactly 50% black & 50% white, with the "Great Colour Divide" 'separating' the goat exactly into two even halves :D Would definitely be something that makes me smile every day :) 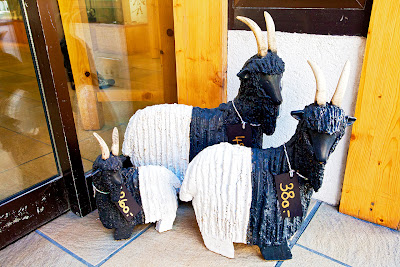 Zermatt is well-known for connoting in minuature the very essence of Switzerland with its herds of sheep grazing grass on picturesque mountain slopes in the shade of the legendary Matterhorn (Monte Cevino, 4478m). To my great delight natural beauty is diligently protected in the region by thoughtfull ecological policies. To prevent air pollution which could obscure the view of the Matterhorn, the entire town is a combustion-engine car-free zone. Most vehicles in Zermatt are battery driven and almost completely silent. Exception is only made for selected municipal vehicles like garbage trucks & emergency vehicles such as fire trucks & ambulances. 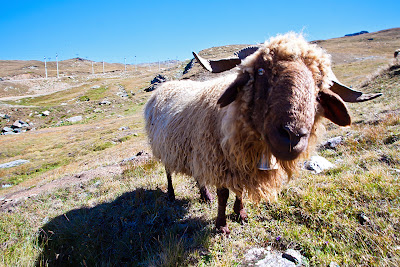 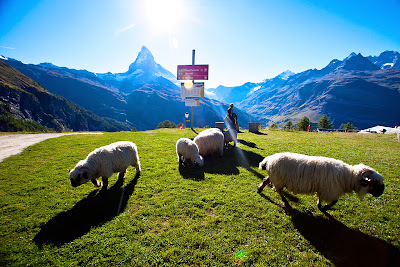 It's not only the smart policy-making, but a very pragmatic approach to integrating technical innovations into the every-day life, that makes the Zermatt region so unique. 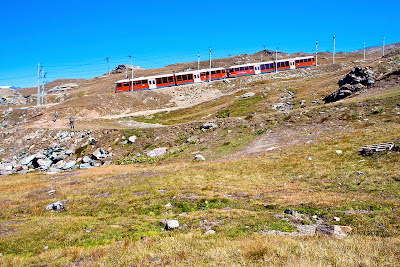 For instance, the breaking force of Gornergrat Bahn trains going down from the Gornergrat summit (meaning: the level difference of 1604-3089m) is recovered (don't ask me how) & used for powering the trains going up. 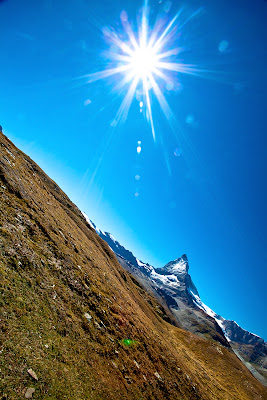 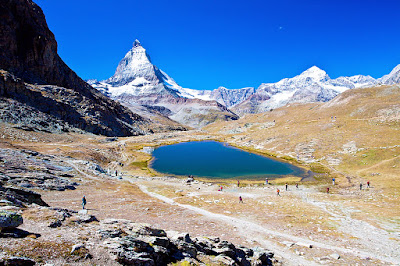 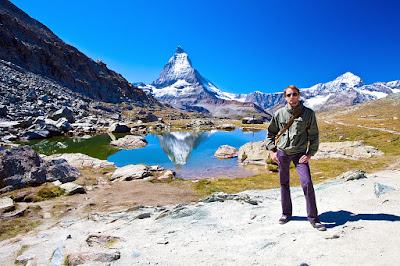 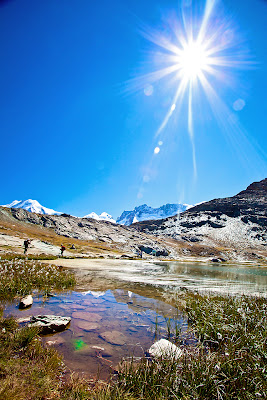 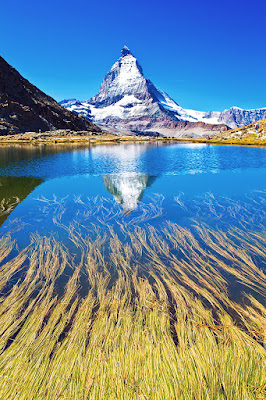 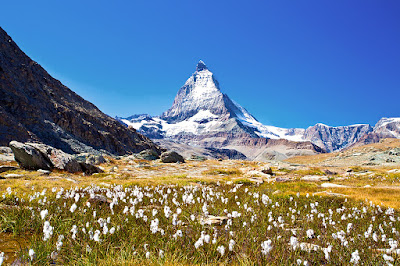 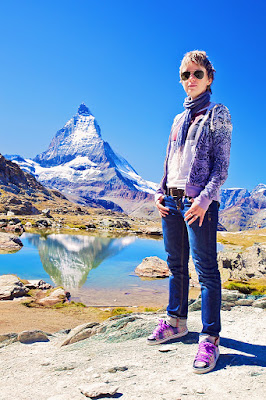 The weather was favourable, so for our 1st day's hike we chose the most spectacular (according my preceding photo-research) spot - Riffelsee. The trip up by feet would have taken the whole day, so we used the scenic Gornergrat Mountain Railway (the highest open-air railroad in Europe) up to the Rotenboden (2815m) station & made our way down to Zermatt along the hiking trails, which  - including photo-stops - still took approx.7 hours (?!). 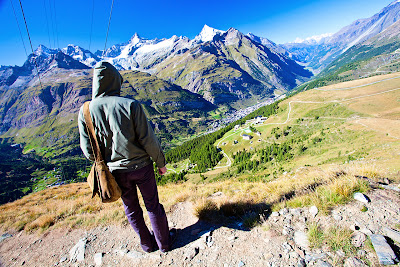 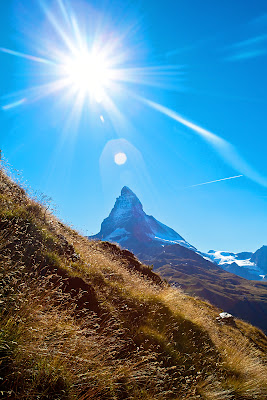 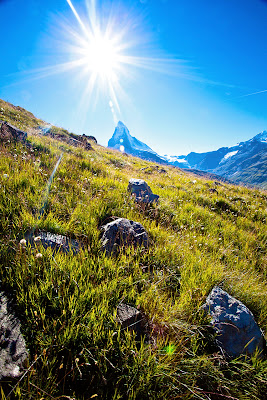 The plan for the second day was to visit the 'less spectacular' Grünsee (2300m), Moosjiesee & Leisee & educate ourselves by means of "Climate Audio Trail" (the hint for which came from Sergey's friend Lars). Climate Audio Trail is an audio-project, developed by the company he is working for, MyClimate, in order to raise awareness about the climate change. It definitely must be noted what a great job they did on putting together such an entertaining "Hörspiel". On the one hand it informs you about climate change & teaches about the science behind it, e.g. how  glaciers' layers can be 'read like Earth's ancient diaries' by analyzing the bubbles of air trapped within their icey coating, etc. On the other hand the ClimateTrail unobtrusively gets you aquianted with local traditions such as yoddeling or "inukshuk"-building (inukshuk translates as "stone man that points the way") 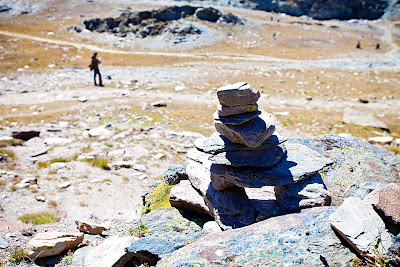 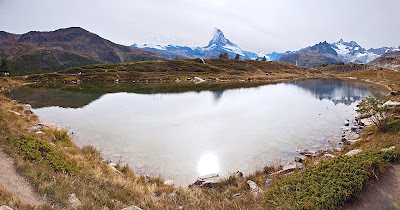 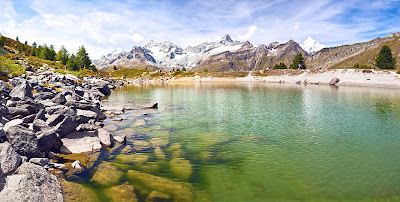 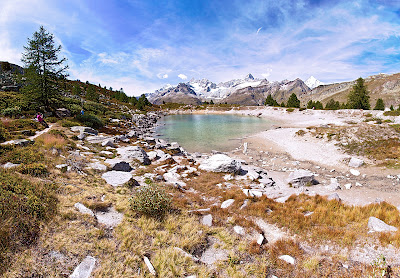 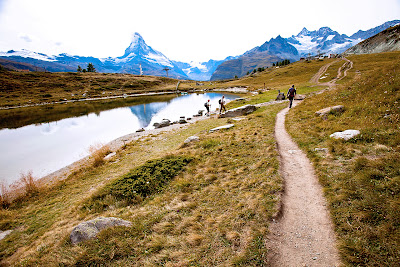 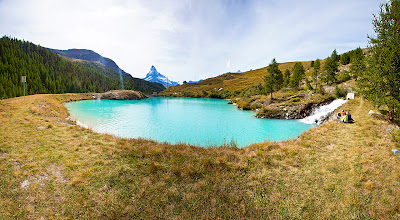 It is also by listening to the Climate Audio Trail that I learnt a pretty cool way of (completely legally) enlarging national borders without waging a war against anybody :) The story has it that in the middle of the 20th century an agreement was reached between Switzerland & Italy that Swiss state boundaries would run on water divides of glaciers in the Alps. Because of global warning the glaciers have since then rapidly melted, which has automatically 'won' the Swiss substantial amounts of land! ;) here we go again - learn from the Swiss: smart policy making will take you further then war-making :P 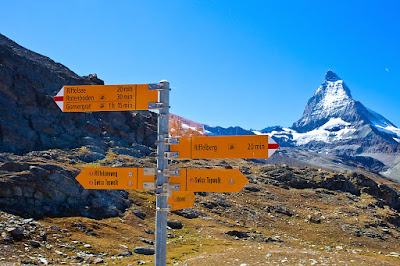 So after educating ourselves on climate change, Swiss history & snapping some shots of swiss cows grazing grass with a view of Matterhorn around Findeln, we peacefully returned via a forest hiking trail back to Zermatt in order to pick up the reward for a hard 'walking/working day' in the form of fondue & some local Valais wine :) 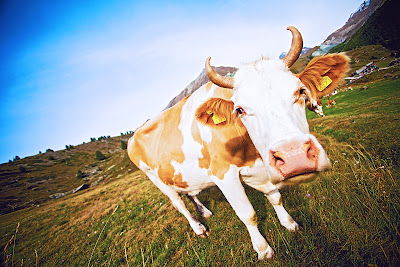 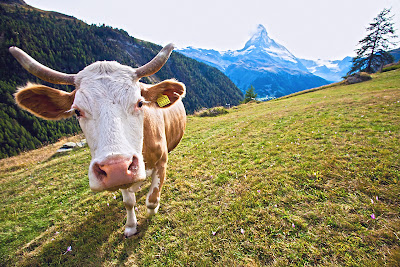 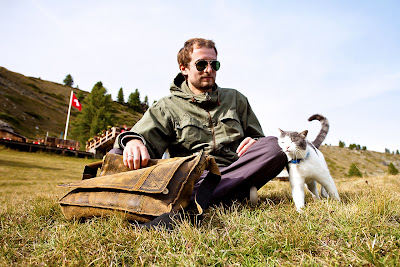