As mentioned in the previous post, the true adventure started the next day, on leaving for Grindelwald, a mountain town that i've discovered 'by mistake' 7 years ago when i was forcibly put off the train in Interlaken because of trying to cheat with the tickets (hehe, best damn day of my life :P ). 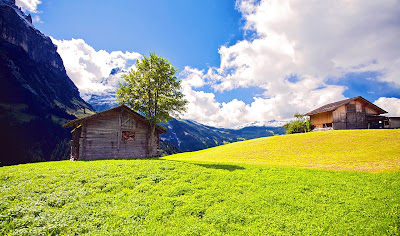 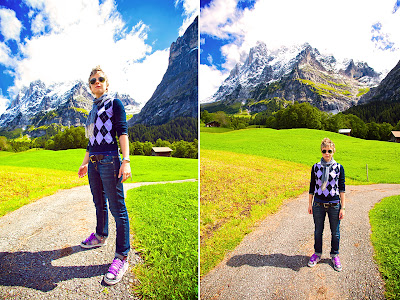 So Grindelwald happens to be situated in the canton of Bern & lies at quite a high altitude in the Bernese Alps - 1,034 metres above sea level, which makes the ride with "Berner Oberlang Bahn" from Interlaken remarkably pictureseuque. 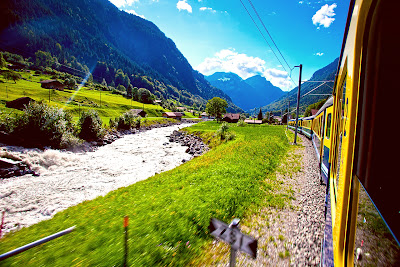 No wonder that Grindelwald can be found in contemporary pop-culture many times, e.g. a James Bond film On Her Majesty's Secret Service (1969) includes a chase through a skating rink & Christmas festival in Grindelwald. Grindelwald's mountains were used as the basis for the view of Alderaan in Star Wars: Episode III - Revenge of the Sith (2005). Some of the action scenes in The Golden Compass (2007) were also shot in Grindelwald. And JK Rowling has been quoted to have used the name of 'Grindelwald' in the creation of her character; Gellert Grindelwald, in the Harry Potter novels.

But as all good things in this world - the wonderful views of Grindelwald cost a lot... And although Jungfrau Lodge gets a high-five from me for a reasonable combination of luxury of modern facilities with the local swiss small-town flavourm the 130 EURO bill for one night was quite impossible to forget... Well, maybe only once i managed to suppress it: in the morning when i woke up to a gorgeous view of the north face of Eiger, immersed in milky fog :P 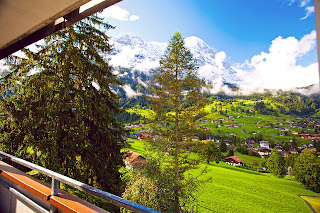 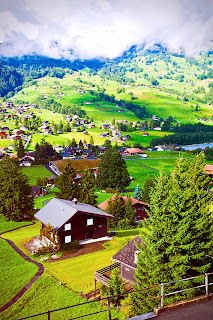 Our touristic goal in Grindelwald was visiting a high (1961 m) mountain pass which connects Grindelwald & Meiringen - Grosse Scheidegg. As the time was limited we took a bus (in contrast to my 4 hour uphill hike 7 years ago ... ah, the sweet things we do when there's no money). 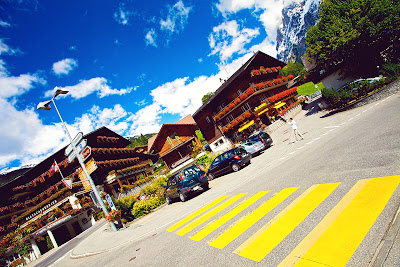 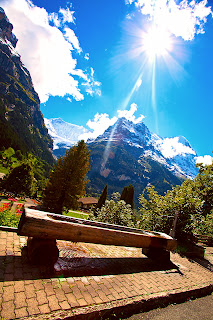 Finding the bus stop was kinda tricky, though, as streets don't have names & the only way to orientate is by adorable & impossible to pronounce house names like "uf em Bühlmättli" or something of that effect. Last time (at the same time of year) when I've reached the altitude of 1'961m it was wonderfully warm & cows were peacefully eating grass. This time over (& some people talk of the global warming :P ) the whole scenery resembled a permafrost desert & there was no sign of even one cow & not even a bit of green grass :P 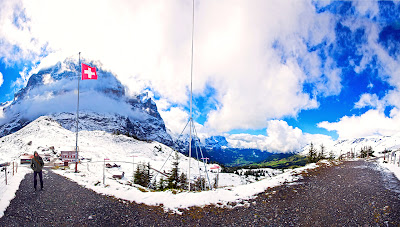 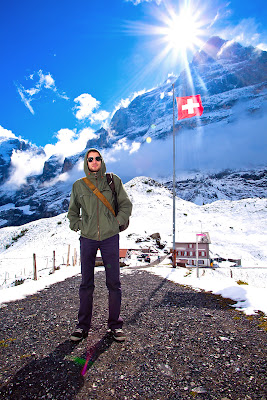 On safely (but quickly) returning from 'permafrost' @ Grosse Scheidegg we ushered to our next stop, canton of Valais. Due to a minor schedule confusion we accidentally 'won' half an hour for a coffee-break-with-a-view in tiny-tiny (but nonetheless gorgeous) Spiez, enjoyed some spectacular views over a medieval castle in the harbour of Lake Thun & the lake itself & hurried to my favourite destination of this Swiss trip - Zermatt, the impressions of which are coming up next! 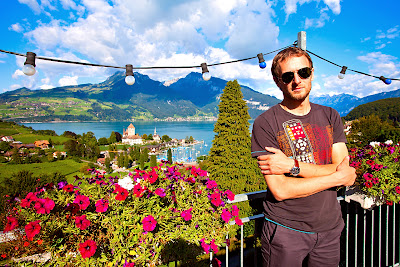 Die Schweiz, la Suisse, la Svizzera, la Svizra, Switzerland, the Swiss Confederation or 'simply' Confœderatio Helvetica in Latin (hence its CH ISO-code)... Lonely Planet deliciously describes it: "you'll find Switzerland a chocolate box bursting with unexpected flavours". And, indeed, speaking from experience (it was my third time in Switzerland in last7 years), one of the reasons why i find Switzerland so fascinating is that all its astounding beauty is compactly packed into very little space & - so in 9 days we managed to visit (& stay for a while in them) 4 different cities: Zürich, Grindelwald, Zermatt, Lucerne without even having to travel around much.
On our first day we've learned that everything's cool in Switzerland & that the swiss do their best to be unlike the rest of the world: Swiss license plates have a different design & measurements, national flag has a different format, blanket slips won't match your blanket size (if you foolishly endeavour to bring a blanket from your home country) & there's no way your electricity plug will fit a swiss socket ;-) 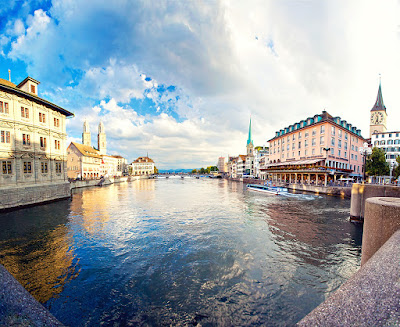 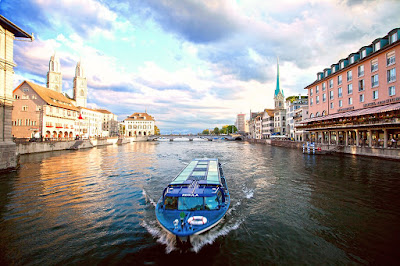 Our Swiss holidays started in Zürich & we very soon felt the contrast of our casual "tourist's clothes" to the local inhabitants' attire ... well, actually it was right on the famous & trendy Bahnhofstrasse, which is so cool for window-shopping (prices are too high for buying, anyway). What can you do: Zürich's quite a fashion-conscious place, so watching business people in expensive suits roam around the streets of the city was our pasttime on the weekend... Well, having the world's fourth-biggest stock exchange in town sets the pitch ;)
But despite being rich (the locals are often made fun of because of being "zu reich", i.e. "too rich")  the inhabitants of Zürich certainly do possess a healthy sense of humour, which is proven by a lot of alternative culture happening along the lakeside in form of fun sculpture art & numerous witty graffiti & hysterically hilarious stickers all around town like 20 IDIOTS: "Das Lesen von Gratiszeitungen gefährdet den gesunden Menschenverstand" ("reading free newspapers compromises one's common sense"), which is a parody of a journalistically awful free daily newspaper 20 MINUTES [hence the one-to-one similar design].
Anyways, the main goal of our visit to Zürich (apart from meeting Sergey's friend Lars @ whose place we were staying in the 'smallest town in Switzerland' - Affoltern am Albis), was to visit the Zürich Open Air 2010. Unfortunately, despite the very promising programme (MANDO DIAO, FAITHLESS, UNDERWORLD, BELLE & SEBASTIAN, STEREOPHONICS & THE PRODIGY), the 1st ZOA has - according to local newspapers - "sunk in a swamp", both figuratively & literary. Because of heavy rains festival grounds were virtually inaccessible for anyone without a sturdy pair of Wellies & made the whole experience rather wet. The not-so-festive mood brightened up a bit when i won 2CHF (approx. 1,5 Euro) in some instant lottery & for the 2nd time when Belle & Sebastian rocked the stage, borrowed a bottle of soap bubbles & the lead singer even playfully allowed some lucky girl from the crowd paint his hand nails red. The "curious discovery" of the festival was Icelandic Jónsi (guitarist & vocalist for Sigur Rós), but the rest was so average that when The Prodigy started warming up, it was already clear that a cosy hot warm bathtub @ home will be preferred over a mud-bath with 20'000 dirty music fans. 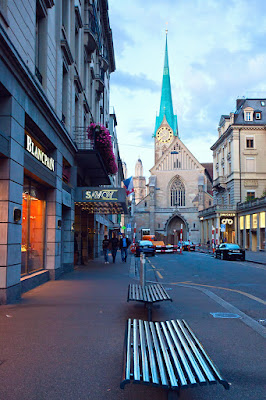 After having peeked into the 13th-century Fraumünster to gaze at the stained-glass windows  designed by Belarusian artist Marc Chagall & having marvelled at the cradle of Reformation, the 16th century Grossmünster, where Ulrich Zwingli first came up with the revolutionary idea of "pray & work", there was not much to do in town, so we headed to Grindelwald, where much more fun adventure started...

P.S. At the end of our Swiss epic journey we again came back to Zürich visit the office of MyClimate (see the post about Zermatt to get to know why it was special), enjoy a dinner @ 'Das Ziegel oh Lac' @ the grounds of the Rote Fabrik & watch the stars from Bürkliplatz. But, as they say: that's an entirely different story (which i'm now skipping for the sake of getting some sleep after a very long day)... 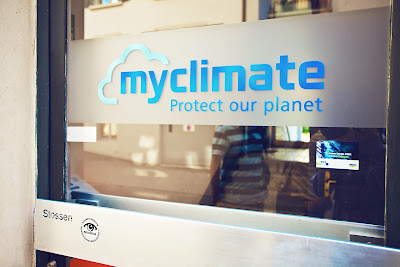 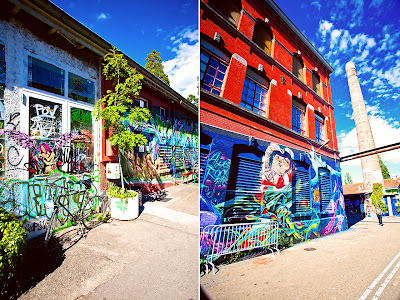 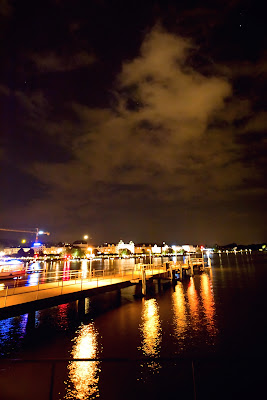